The 370Z Roadster has been exhibited in New York in 2009 and his arrival in France is scheduled for February 2010. But we have, for a brief essay on the racing track Le Mans BugattiTake the wheel of a model with pre-series suspension set for the country of Uncle Sam and the box 7-speed automatic with paddle wheel … 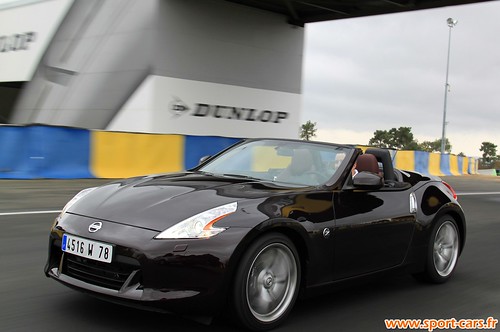 From the start, engineers Nissan apprehended the project 370Z as being composed of a cut AND a car (unlike the 350Z, Became convertible after the creation of cut). Thus, it was announced a weight close to that of the coupe (30 kilograms), thereby having little effect on performance. Compared to 370Z CoupeThe 370Z Roadster includes additional structural reinforcements, including the amounts of the windshield and side skirts.

But it is above the side of refinement that we tend to turn on the car. And compared to the 350ZWe noted a higher quality plastics. It is not in the best German, but progress is clear and should be welcomed. 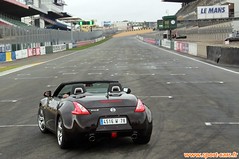 For your convenience, you can enjoy a soft-top opening / closing system that has a lining fabric for better sound insulation and a heated rear window enlarged compared to 350Z Roadster. In just 20 seconds, you can Convertible (and recapoter) through buttons located on the center console or on the doors. The (un) locking in the windshield automatically without driver intervention. Finally, the shape and position of the glass deflector, located between frames, behind the fixed head restraints, have been optimized to further reduce turbulence in the cabin, that driving on the circuit was confirmed.

The 370Z Roadster offers exclusive mesh seats air-conditioned (heating as cooling) studied specifically in order to drive wind in your hair whatever the outside temperature. 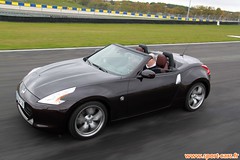 Like the 370Z CoupeThe Z Roadster presents a more muscular exterior styling than its predecessor with strong lines. The wheelbase has been shortened from 100 mm (from 2 650 2 550 mm) and the total length of the car has been reduced from 66 mm (from 4 313 to 4 250 mm). The new 370Z Roadster receives a hood and side doors and a trunk lid of aluminum in order to limit the weight. At the same time, the hull structure has been reviewed in depth, gaining rigidity and stability. But this gain is accompanied by a more sensitive behavior and the sharp cut from the 350Z, we should find on the roadster.

In Europe, the 370Z Roadster will also use the same fully independent suspension that Z Coupe. An architectural double wishbone arms with forged aluminum alloy, light alloy cradle molded vacuum and sway bar replaces lighter, front, of the multilink system 350Z. At the rear, the new system with four arms is both stiffer and lighter with a cradle back in one piece. And for guidance and comfort perfect shock absorbers ultra-fast response have been installed. 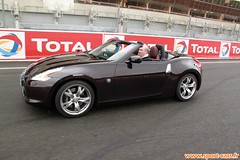 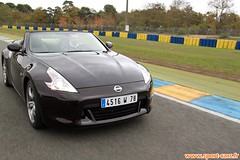 The 370Z Roadster has the engine of his brother, the coupe. We therefore retouve under the hood the V6 double overhead cam head 3.7-liter variable valve CCEL (Variable Valve Event and Lift Control) and 328 horses (he lost 3 horses in passing). The torque is 363 Nm at 5 200 rpm. What you will reach 250 mph and cross the 100 km / h in 5.5 seconds and 5.8 gearbox in automatic gearbox.